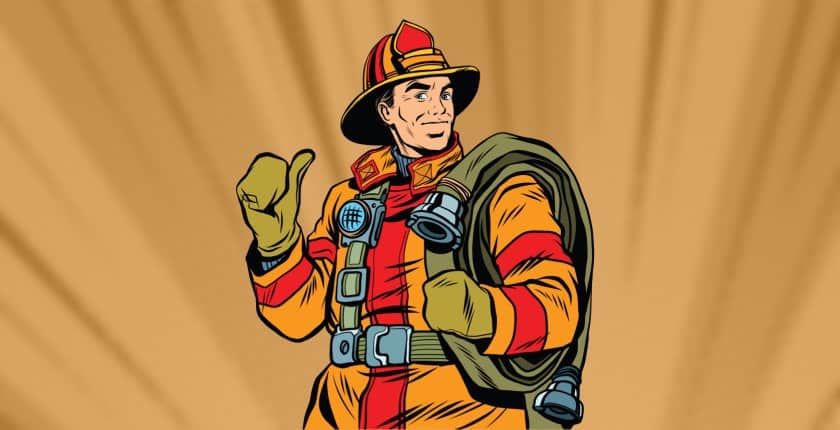 Firefighter funeral traditions provide our fallen heroes the respect and gratitude they deserve for the ultimate sacrifice they made to our society. The types of funerals that firefighters have are usually classified as:

The firefighter funeral procession is assisted by the local police department. The police will help with the arrangement or an ideal traffic route for the procession. They will also lead the funeral procession as well as provide assistance with traffic control.

Helmet on the Altar

During the funeral service, the firefighter’s helmet will be placed on top of the casket or upon the altar.

Fellow police officers or firefighters will stand guard at the funeral entrance. These members, called the Honor Guard, are picked from fellow firefighters or officers. Their dress is formal and they are also the pallbearers that carry the firefighter’s casket.

The firefighter’s casket is covered with the flag from their firehouse that they served in. The color guard will fold the flag at the end of the ceremony and then pass it on to the next of kin to take in remembrance.

Tolling of the Bell

“Tolling of the Bell” happens during the firefighter’s funeral ceremony. This tradition is based on the telegraph pattern of communication. In the old days, the telegrapher communicated the term “fell” with the 5 dashes and a pause. This would be repeated 2 more times. Today, the bell ceremony sounds like the old firehouse bells that rang if there was a fire.

Fire Rigs at the Funeral Procession

Firefighter funeral will have several fire rigs attending the ceremony. The  fire rig of the deceased will lead the procession to the cemetery.

The playing of bagpipes are possibly most recognizable of all the firefighter funeral traditions.

Firefighter funerals and bagpipe music have a long history together. Firefighters and police officers have had bagpipes played at memorial services since the 19th century. This history began when Irish immigrants started arriving in the 1800s because of the potato famine in Ireland.

Irish Americans didn’t have many employment options due to discrimination. They were relegated to dangerous jobs and had to become firefighters or police officers. These jobs had a high death count and bagpipes were the instrument of choice for the Irish. Today, the most common firefighter songs played at funerals are Amazing Grace and The Minstrel Boy.

The minstrel boy to the war is gone;
In the ranks of death you’ll find him;
His father’s sword he has girded on,
And his wild harp slung behind him;
“Land of Song!” said the warrior bard,
“Though all the world betrays thee,
One sword, at least, thy rights shall guard,
One faithful harp shall praise thee!
The Minstrel fell! But the foeman’s chain
Could not bring that proud soul under;
The harp he loved ne’er spoke again,
For he tore its chords asunder;
And said “No chains shall sully thee,
Thou soul of love and bravery!
Thy songs were made for the pure and free
They shall never sound in slavery!

Give Me Concern
A willingness to seek out those in need
Give Me Courage
The boldness of spirit to face and conquer fear,
share and endure the ordeal of other in need.
Give Me Strength
Strength of heart, to bear whatever burden
might be placed on me and strength of body to
deliver safely all those placed in my care
Give Me Wisdom to Lead
The Compassion to comfort, and the love to serve unselfishly wherever you take me
And please Lord, through if all, be at my side.

When I am called to duty, God
Wherever flames may rage,
Give me strength to save some life
Whatever be its age.
Help me embrace a little child
Before it is too late
Or save an older person from
The horror of that fate.
Enable me to be alert
To the weakest shout
And quickly and efficiently
To put the fire out.
I want to fill my calling and
To give the best in me,
To guard my every neighbor and
Protect his property.
And if according to my fate
I am to lose my life
Please bless with your protecting hand
My family and my wife.