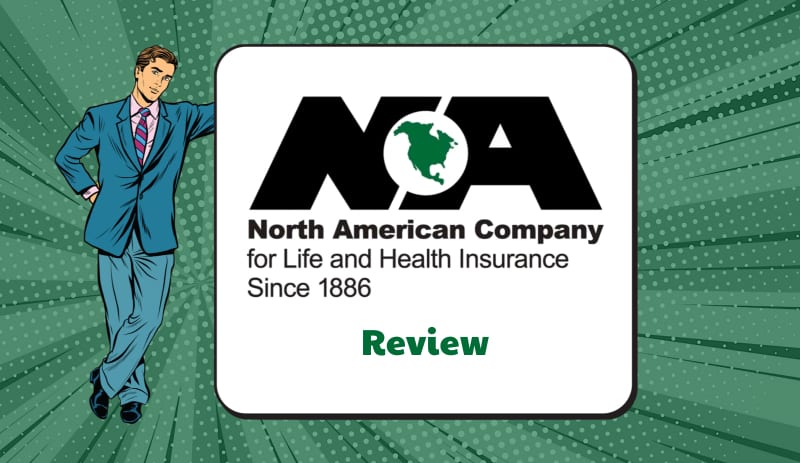 Now part of the Sammons Financial Group, North American has been covering people since 1886, and as far as life insurance goes, they recently went over their rates and updated them to be more competitive.

You can start comparing quotes at any time using our online quote form, but know that it is always wise to go over trusted reviews of each life insurance company before making a decision. We work with over 60 providers but as an independent life insurance agency we receive no compensation or incentives to write reviews of these providers.

How to choose? If you’re comparing companies & looking to choose from two carriers, one rated A+ and one rated A++, either one is likely to be there when you need it. However, if you’re picking carriers that are rated B+ and A+, financial strength could factor in your buying decision. Try to avoid companies that 1 or more financial agencies rate as potentially vulnerable.

This company currently has over $13 Billion in total assets, which indicates it is financially strong. We showed that North American holds an A+ rating with both A.M Best and Standard and Poor’s (S&P). That means you shouldn’t be overly concerned about them going bankrupt and not being around in the future.

It is also worth mentioning that North American currently is not in any debt, which is impressive to say the least since many other companies are.

All of this is important information though, because you want your insurance provider to be in good standing and on firm financial ground. If you do not take this into consideration, you risk going with a company that could go under or get into financial hardship while you still have a policy with them, which could mean they can’t pay your death benefit in the end.

Ranked No. 83 on Forbes’ 2017 List of America’s Largest Private Companies. The list includes 225 privately-held companies with revenues of more than $2 billion.

Let’s face it— low, competitive rates are what ultimately matter for a lot of people. The good news is that North American is generally very competitive, especially when you compare their rates to other top-ranked companies like Transamerica, SBLI, American General, Prudential, Protective, and Banner Life.

Here are the rates she is likely to be offered:

North American is also one of the top companies selling larger face amounts like $1 million to $5 million life insurance.

Will North American give you the best rate?

Will North American or some other company like CMFG Life, Equitable, Progressive, or AAA get you the best deal? If you want to make sure you’re getting the best life insurance policy available, here’s what you need to do…

One of the great things about this company is that you have a lot of options when it comes to term life insurance, and this makes it possible for you to get a customized policy that suits your specific needs.

For example, North American makes it possible for you to convert a term life policy into permanent life insurance up until you are 69 years old, without having to get another medical exam, etc. You can also still renew your term policy without fulfilling these extra requirements up until you are 98 years old.

North American offers you the ability to customize your policy with life insurance riders. They offer the following:

If you are diagnosed as terminally ill with less than two years to live, the accelerated death benefit rider allows you to access up to 75 percent of the policy death benefit (with a cap on $250,000) without paying extra fees or a penalty.

If you become disabled and cannot work, the Waiver of Premium rider allows you to waive paying your premiums. This is a great benefit that can make sure your life insurance premiums continue to get paid even if you’re out of work.

For instance, if you are between the ages of 18 and 35 and realize you will need more coverage (such as in the case of having another child), you can do so after having your policy for one year. However, this option does come with limits: You can only get another 50 percent of the original death benefit amount on the first year anniversary of your policy, and during the second and third year you can only purchase another 25 percent.

If you’re between 36 and 40, you can only purchase more coverage on your first and second year policy anniversary. If you are older (up to age 55), you can only do so in the first year.

Not many life insurance companies give you a variety of options to pay for coverage, but North American does. With them you can pay using:

As you can see, North American is among the lowest. Even so, it may not be the best choice for you, so it is always a good idea to learn more about of your options before making a decision.

Looking for a Non Medical exam option? You may want to check out our review of ANICO to see if that is a better fit for you.

You can start comparing rates today using our online quote tool and get an instant quote. To learn more about life insurance, make sure to visit our page Life Insurance 101 or life insurance rates by age to see sample quotes for your age group.